The pandemic hit many media and entertainment giants’ operations and earnings hard in 2020, leading to furloughs and layoffs. Yet a majority of big Hollywood CEOs’ pay packages for the latest year actually rose — some considerably. And a vast majority came in above the median $15.5 million pay seen in the Equilar 100, an annual study of big companies across all sectors.

“We saw CEO pay at the largest U.S. companies decline slightly, by 1.6 percent, in 2020,” explains Amit Batish, director of content at data firm Equilar. “During the pandemic most executives took pay reductions in the form of salary and bonus cuts,” which allowed firms to “conserve immediate cash.” But “long-term stock awards remained intact for the most part.”

That’s why well-publicized temporary salary sacrifices early in the pandemic — from the likes of Live Nation chief Michael Rapino, Fox Corp. CEO Lachlan Murdoch and Endeavor mogul Ari Emanuel, among others — didn’t leave these leaders with depleted compensation packages, given a vast majority of their packages comes from non-salary sources. Plus, “executive compensation for big media execs has historically, and curiously, ranked on the relatively high side versus peers in many other sectors,” CFRA Research analyst Tuna Amobi notes. 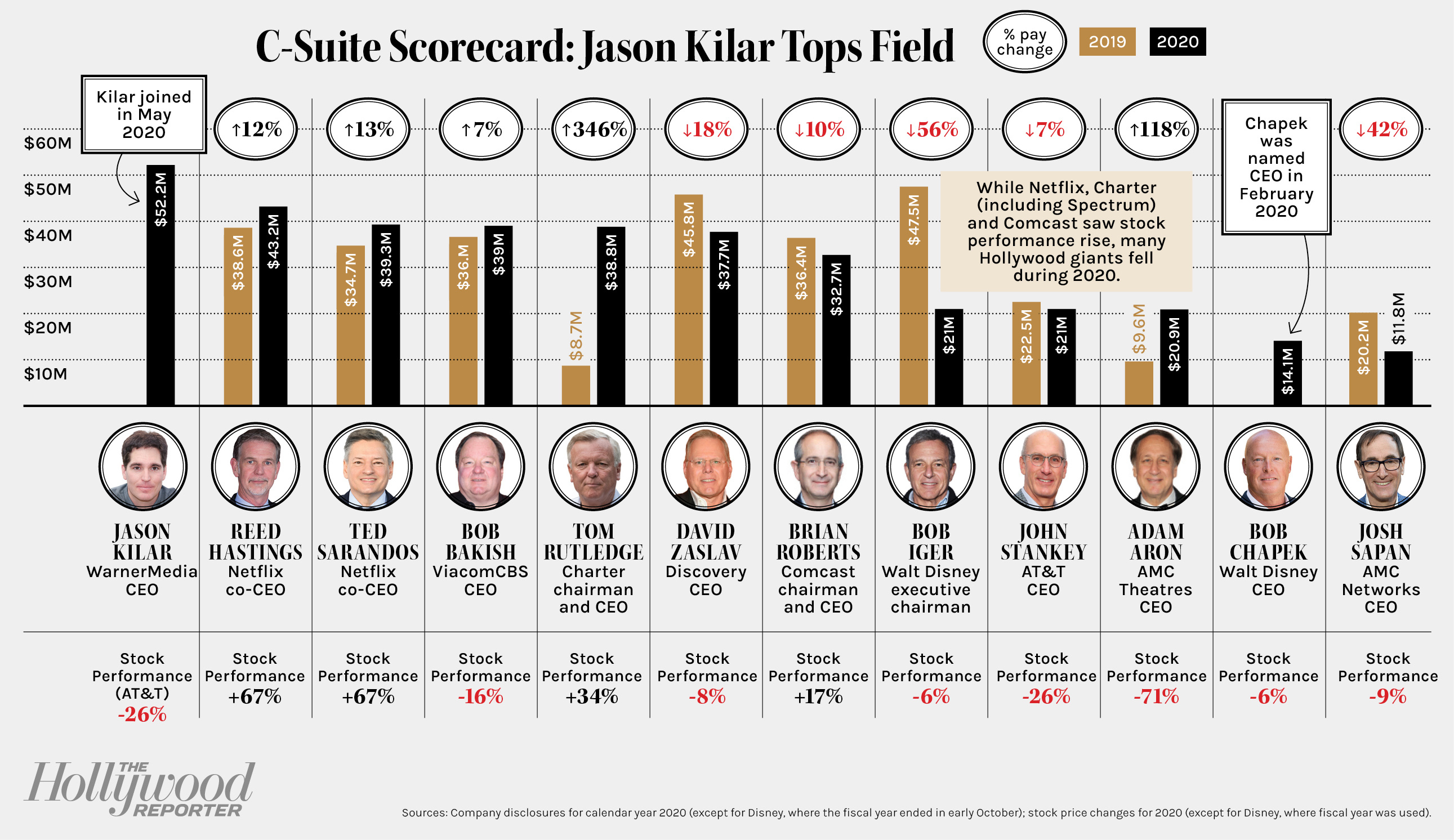 The disparity between pay for top executives and average employees also continued in the most recent year. Despite Discovery CEO David Zaslav’s pay dropping to $37.7 million in 2020, for example, it was still 565 times the size of the median employee’s, down from 578 in 2019. (Across all sectors, the CEO-to-employee pay ratio was 238-to-1, per Equilar.) Batish notes that entertainment sector pay in the latest year “did depend on the industry and company,” though, with some players and divisions seeing “higher performance, such as Netflix, which saw a large spike in subscriptions at the start of the pandemic.”

Notably, Disney was one of the rare entertainment companies where the leadership gave up bonuses for the company’s fiscal year, which ended Oct. 3. The Burbank-based conglomerate explained that “in light of the company’s circumstances,” all its top executives agreed to forgo bonuses in addition to temporary salary cuts that started in April 2020. Executive chairman Bob Iger agreed to forgo his salary through the end of the fiscal year; Bob Chapek, who was promoted to the CEO post in February 2020, agreed to forgo 50 percent of his through late August.

At AT&T, CEO John Stankey’s target bonus and salary, starting with his elevation to the CEO role midyear, was capped at 50 percent upon his request. “If execs didn’t cut their cash bonuses, shame on them,” Hal Vogel, CEO of Vogel Capital Management, says, lauding those who agreed to give up some money for doing “the right thing.”

Some industry heavyweights saw the size of bonuses affected by missed financial targets during the pandemic. For example, Comcast boss Brian Roberts and other top executives gave up their entire salaries for the April-to-September period. The bonuses for Roberts ($7.7 million) and NBCUniversal CEO Jeff Shell ($5.9 million) amounted to only 75 percent of their target values. But the board credited Roberts for “successfully leading the company during this unprecedented period.” And it lauded Shell, in his first year as CEO of NBCUniversal, as he “effectively led, realigned and mitigated negative COVID-19 impacts on NBCUniversal,” “successfully launched Peacock” and “introduced a new ‘premium video on demand’ strategy to bring movies directly to consumers given movie theater shutdowns and realigned how the television, streaming and production businesses should operate to more effectively compete.”

Others, however, such as ViacomCBS, disclosed no COVID-19 impact on remuneration decisions. The conglomerate behind the newly launched Paramount+ streamer also highlighted that it handily exceeded its financial goals in the first full year after the megamerger that created the firm when adjusting for distorting factors, which was seen as a reference to the pandemic. CEO Bob Bakish, for example, received a bonus of $19.7 million, 60 percent above his target. Netflix, whose co-CEOs Reed Hastings and Ted Sarandos made a combined $82 million in 2020, disclosed that its compensation structure was determined in 2019, before the pandemic.

The biggest 2020 pay package in Hollywood went to Jason Kilar, who started as WarnerMedia CEO on May 1 and has overhauled the media giant to prioritize streamer HBO Max. Touting the former Hulu boss’ “unique expertise,” AT&T said a “competitive” offer was needed to attract and incentivize him. The biggest part of Kilar’s calculated compensation was $48 million in restricted stock, even though he will receive only a quarter of the underlying shares each year over a four-year period. So expect a much smaller package for Kilar when 2021 compensation is revealed.